Recently, I was applying Windows Update to a 2008 system and it failed on 4 updates after being successful for months.  I was unsure why, but the updates were Office updates.  I don’t think that the fact they were Office updates are important, but it’s something to mention anyways. 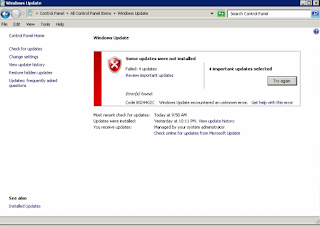 Symptoms of the issues I found and the resolution for this issue.

To determine the cause of the issue, I used the nicely revamped Event Viewer and looked at the BITS-Client logs.  Which was a waste, nothing showed up there.  I checked the WindowsUpdateClient log and nothing was there either.  I then learned BITS uses WinHTTP when I was googling for this issue and saw there was a WinHTTP log file.  (You may have to enable analytics and debug logs).  I enabled the Diagnostics Log. 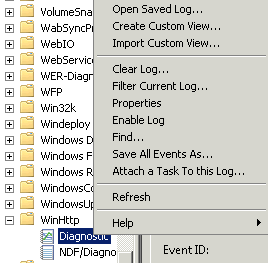 When reattempting to execute Windows Update I went back into the log and scanned through it.  I found the following:

Windows update was going to the wrong server!  The event viewer said it was going to wswsus02.XXXX.ab.ca.  This was our old server address and we since replaced it with going directly to the IP of that server via GPO.

Checking regedit for the WU preferences showed it was pointing to the correct server, but for some reason Windows Update wasn’t picking up the new server.  Rebooting the machine and refreshing the GPO did not resolve the issue.

These did not appear to work however.  But, we did try the following:
esentutl /p %windir%securitydatabasesecedit.sdb /o
Gpupdate /force

And I believe this worked.  After running this command, WinHTTP reported that it was pulling the Windows Update from the Microsoft servers, not our WSUS server:

At this point I could have probably ran the net stop and net start commands and it may have worked, but I rebooted the server instead.

Upon the server coming back up I reran Windows Update and confirmed it was pulling from our WSUS server:

Windows Update then downloaded and installed the updates successfully!