I have setup our PVS environment to execute the vDisk Automatic Update feature utilizing a custom script (update.bat).  This script does a bunch of things, resync’s the time with NTP (to avoid daylight savings issues), refreshs GPO’s, executes Windows Update, cleans up temp files, runs the PVS optimizer, etc.

Unfortunately this can take longer than 30 minutes.  For some reason, when executing the ESD client as “None” (aka, so a script runs) the “Update timeout” doesn’t seem to take effect, instead the 30 minute shutdown timeout is on the clock.

The only solution I have been able to come up with so far is set to run the updates in less than 30 minutes.  I think I’ll attempt changing the “Update.bat” to “Preupdate.bat” and see if that avoids the “Shutdown timeout”.

Unfortunately, I do not know when the shutdown timeout period starts or why it starts.  I was hoping the “Update timeout” was started when running the “Update.bat” file.  This does not appear to be so, sadly.

Citrix documentation implies that you should work hard to keeping the timeout below 30 minutes.

“Citrix recommends to only apply updates that can be downloaded and installed in 30 minutes or less.”

NOTE: This does NOT change the value in the GUI and will override the  value in the GUI, regardless of what it is set to.  You need to restart the SOAP service after making this change.  This registry key must exist on the PVS server that the site designates as the “vDisk Update Server” 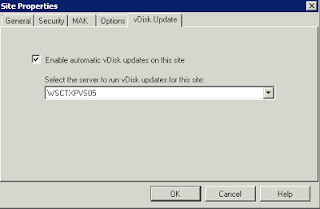