We have run into an issue where we have Provisioning Service 6.1 and XenApp 6.5 working together. After we update the vDisk (say, for Windows Update) we run through a script that does things like the “XenApp Prep” to allow the XenApp 6.5 ready for imaging. It appears that there is a bug in the XenApp Prep that sometimes causes it to not fully get XenApp 6.5 ready for rejoining the farm. The initial symptoms I found were:

Event ID 4003
“The Citrix Independent Management Architecture service is exiting. The XenApp Server Configuration tool has not been run on this server.”

I found this CTX article about it, but nothing of it was applicable.

I did procmon traces and I found the following registry keys were missing on the bad system: 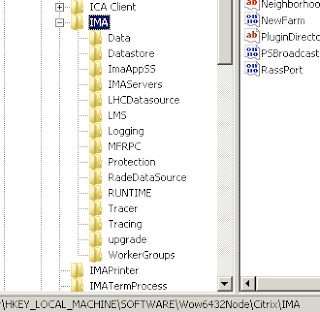 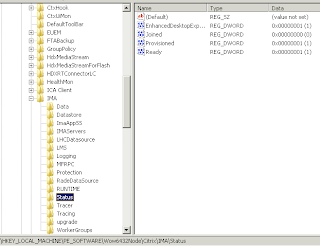 A working system with the Status key. Note Joined is “0”

After adding the Status Registry key:

I tried restarting the service and the progress bar got further but then still quit. Procmon showed me this:

That is ACCESS DENIED when trying to see that registry key. It turns out that the IMAService does not have appropriate permissions to read this key. The Magic Permissions on a working box and what you need to set here looks like this: 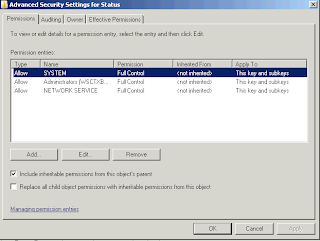 Notice that none of the permissions are inherited and “NETWORK SERVICE” is added with full control to this key. Now when we try and start the Citrix Independent Management Architecture service we get the following errors:

After doing that, we can start the IMA Service and MFCOM. If instead of IMA Service starting you get the following error message:


Ensure the following registry is populated: