So we have an application that requires the “%CLIENTNAME%” variable to be passed to it in it’s exe string.  The string looks like so:

The issue we have is APPV does not seem to get that variable and pass it to the program.  So when the program starts, it makes %clientname% folders in a temp directory and we can’t have two %clientname% folders in the same directory so only one instance of the application can be launched *period* if we do it this way, as opposed to one per server.
To resolve this issue I wrote a script that will pass the %CLIENTNAME% variable to AppV by ripping it out of the registry:
MS DOS

This worked for AppV 4.6 without issue.  Now with AppV 5 I get an error, PATH NOT FOUND when trying to launch this script.

To verify the path exists in the app I ran the following commands: 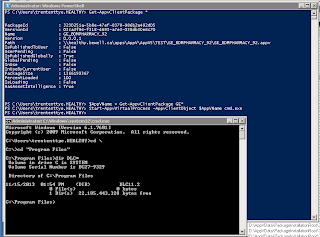 This command was failing.  It appears that when you are launching the .cmd file directly AppV 5 starts the cmd.exe *outside* the AppV bubble and it doesn’t connect to the appvve.  To correct this I tried this command line:

Success!  It launched successfully and saw the directory and everything was good there after.  So let that be a lesson to other AppV 5 package makers, if you need a pre-launch script you may need to modify your published icon to put another cmd.exe /c before the command file for it to start in the bubble.

A very good AppV blog has already discovered this issue and came back with a better fix than mine:
http://blogs.technet.com/b/virtualvibes/archive/2013/10/17/the-issues-of-sequencing-bat-shortcuts-in-app-v-5-0.aspx