Our AppV 5 environment is a full infrastructure implementation.  We utilize the management/streaming server to pull the applications down to our Citrix XenApp 6.5 servers.  Our XenApp servers are Citrix PVS servers, we enable the Cache on RAM with disk overflow and the write-cache intermediate mode.  To maximize CPU performance we have our ESXi hosts set to maximum performance and disable power management in the BIOS of the hosts.  We have some applications that are very latency sensitive and the switching of power states on the ESXi hosts have caused performance degradation so we have power management disabled.  We have setup our PVS servers with the secondary D: WriteCache disk where we fully mount the AppV 5 packages, removing the streaming latency that going over a network may add.

Because of some performance concerns with the Shared Content Store (SCS) I was tasked with coming up with a way of determining if there is a performance impact of switching from fully mounted applications.  In order to determine the impact my plan was to measure a baseline based on disk performance.  Our SMB share that we are storing our .appv packages actually has the same performance as the local disk.  Since AppV packages are immutable, the only performance consideration we should be concerned is READ performance from the SMB share compared to the local disk.  The writes occur in the %userprofile%appdatavfs which is stored on the C:\ drive.  The Cache to RAM with disk overflow feature would ensure that write performance into those directories are fast and should be near instant.

With that said, I’ve used the diskspd.exe application (new from Microsoft) to measure performance. AppV 5 utilizes a 64KB allocation size so that’s what we’ll set as our -b value.  We’ll measure Latency statistics comparing local disk to the file share as well. 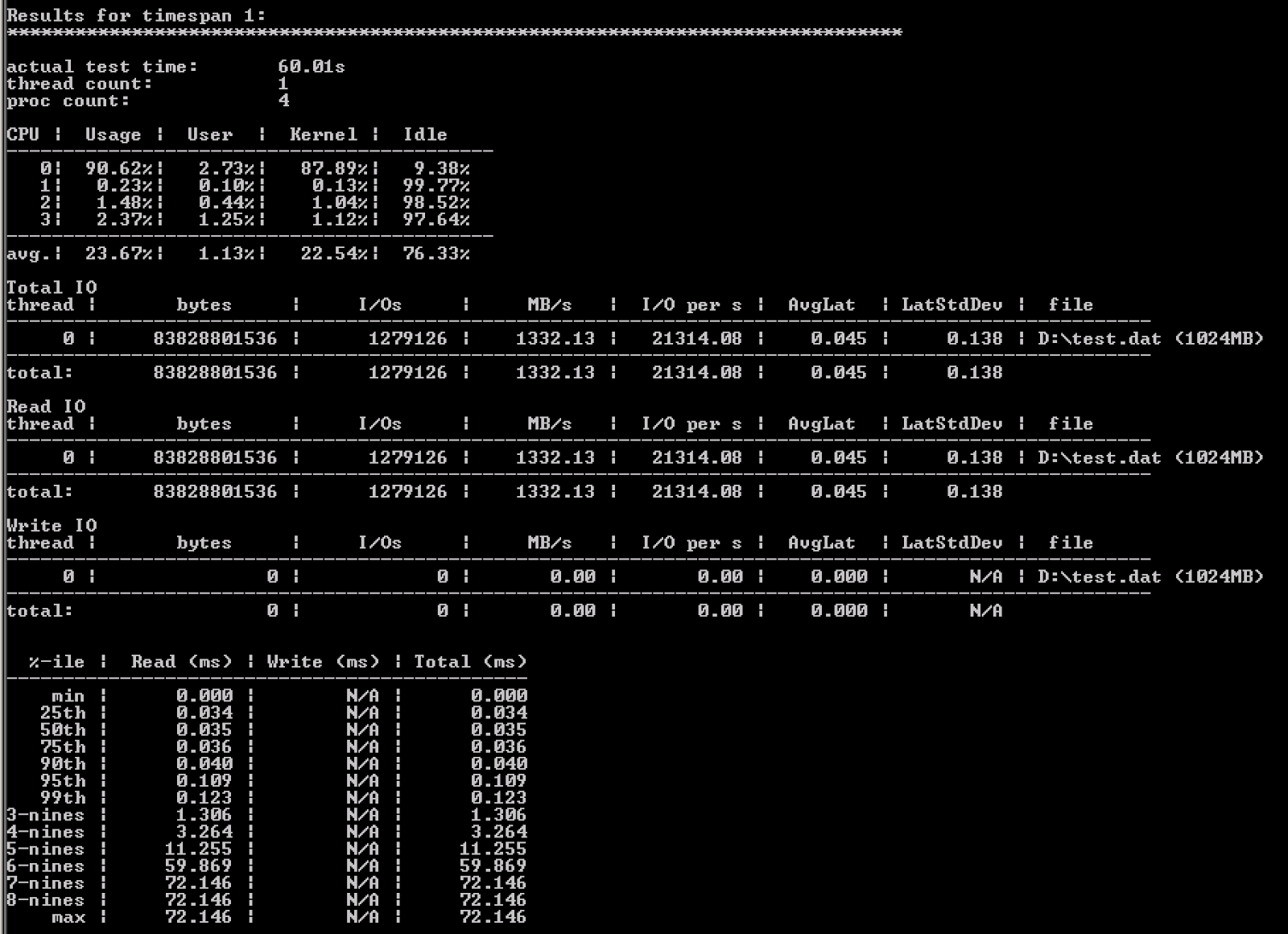 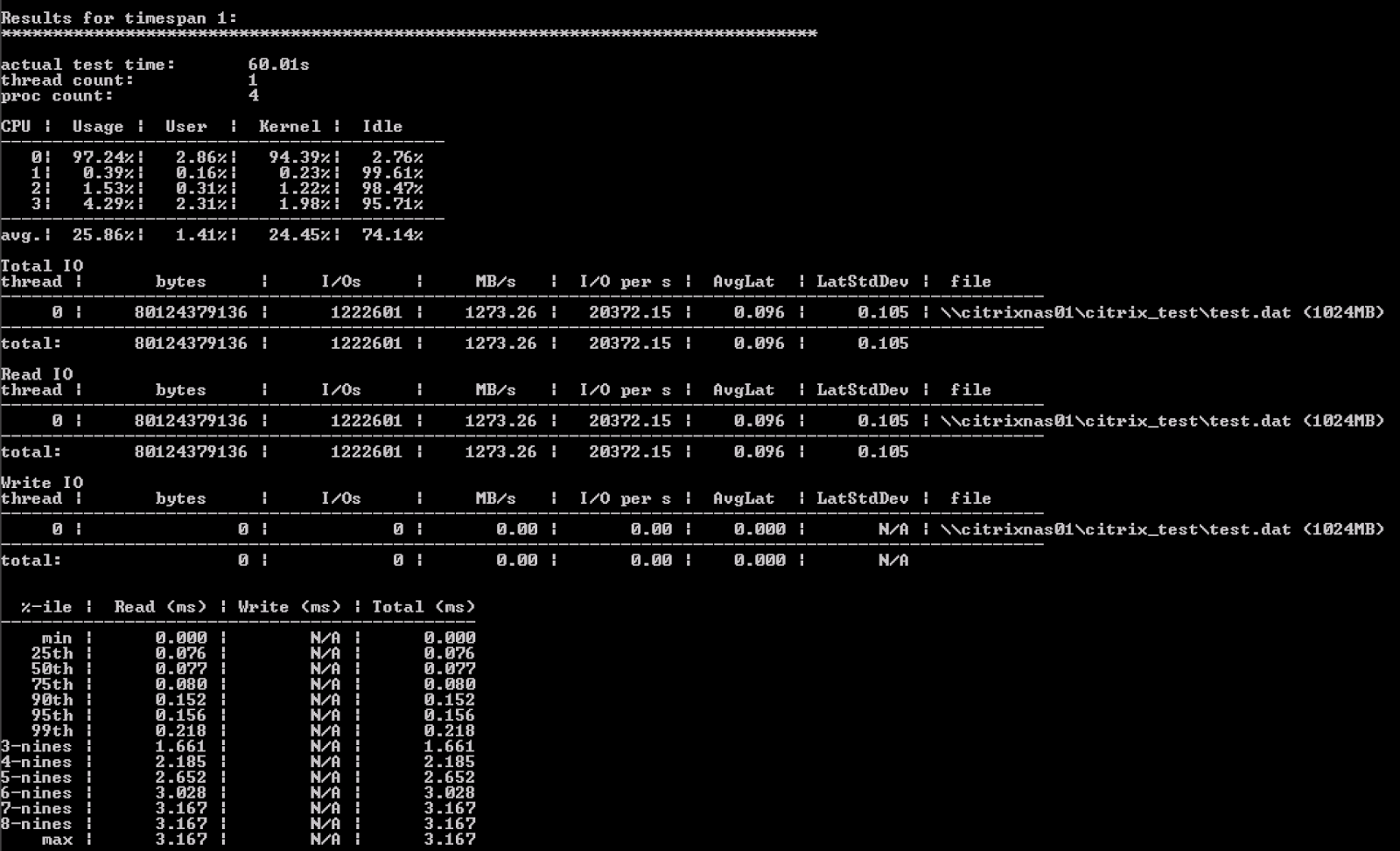 Based on these results, the local disk appears to be nearly identical to the SMB share with the average latency a little more than half on the local disk.  Although it’s half on average, we are still in the sub 1ms time range which is significantly faster than you could get with a physical server with a single local disk.

The next test I have is launching an application and getting to the splash screen to see how long it takes to load.  For this test I’ve written a AutoIt script that takes two parameters, the name of the program to launch and the window title to monitor for.

I setup a cmd file with my program (Epic) because it takes some parameters prior to launch.  I then pointed my timer application at it.

The results (with SCS):

The columns are Time Completed, Duration (in ms), Window to check for, Command executed.

First launch time after restart is 48 seconds then subsequent launches are essentially identical to just the stop/start appvclient service + add/publish.  Which makes sense as our AppV5_Data_Precache script does a add/publish.  Evidently, we’re going to have to go further into AppV to understand what’s causing it to take so long.  To start, I’m going to detail our package a bit.

The application I’m testing this with is Epic.  It’s a huge application.  AppXManifest is 72MB, FilesystemMetaData.xml is 1.7MB, Registry.Dat is 62MB.

It contains 22,000 files totalling around 2GB in size. 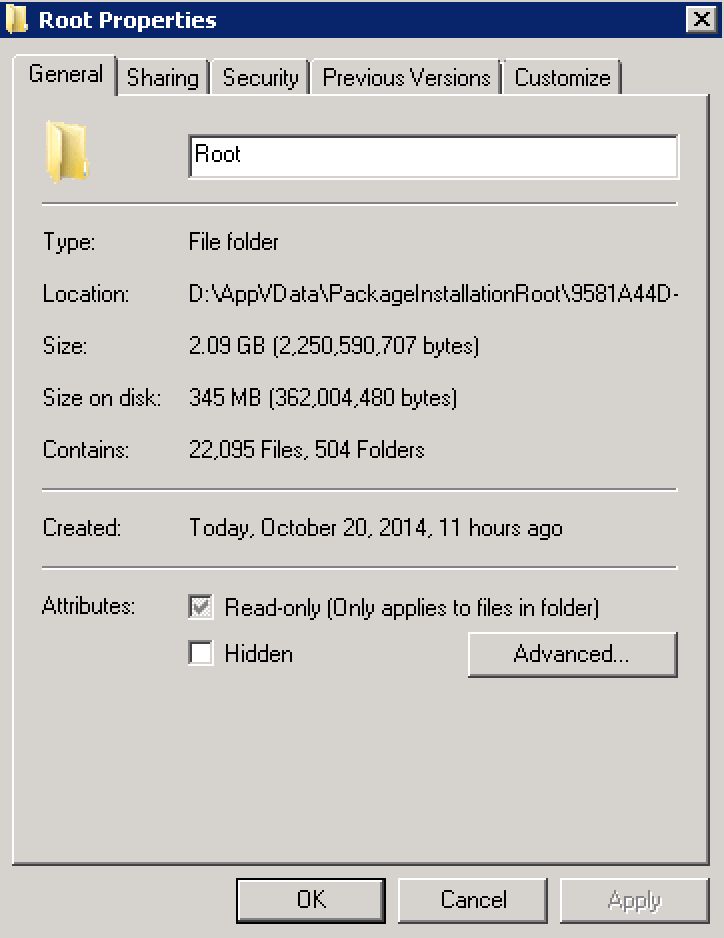 When AppV is “launching” the application for the first time it starts consuming memory and CPU for the 196 seconds that it’s launching, peaking at nearly 600MB RAM and 50% CPU (though most of the time it’s peaked at 25% CPU).

Perfmon.exe doesn’t do a whole lot better with large gaps between file/process/network accesses:

So I’m not sure what the hold up is with regard to the delay for this application.  None of the usual tools I use to monitor performance is giving me any hints or indications of why it’s delaying launch.