Continuing on my previous post I was troubleshooting some issues with some Zebra label printers.  I thought I had it working by switching the rendering path to XPS.  This did allow the printers to print – or so I thought.  It turns out that some of the older Zebra printers we had (LP-2824) were not printing the labels correctly, a newer LP-2824 PLUS was printing correctly.  The LP-2824’s were scaling the labels down to 20% for some reason.

In order to capture this so I wasn’t wasting legions of paper, you need to turn on ‘Keep printed documents’ in the ‘Advanced’ tab of your printer. 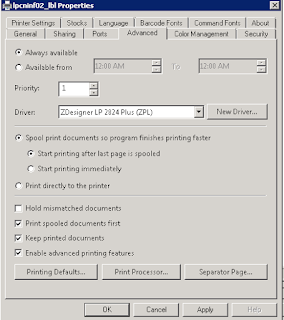 On your print server (not the client), this option will store the spooler files (SPL) here:
C:\windows\system32\spool\printers

Generally, there are two types of formats encapsulated in a SPL file, RAW and EMF.  Citrix provides a EMF reader in ‘cpviewer.exe’.  This utility is located in Program Files (x86) and is used like this:
“C:\Program Files (x86)\Citrix\ICA Client\cpviewer.exe” C:\00167.SPL

This will bring up a preview.

I setup two scenarios for printing.

Scenario 1 – Printing directly to the print queue with the “ZDesigner LP 2824” driver
Scenario 2 – Printing through the Citrix Universal Print Driver via UPS.

Trying both scenarios caused my cpviewer.exe to hang/freeze.  This is where I learned the cpviewer utility ONLY works with EMF-type SPL files.  Trying to read a RAW file will cause it to hang.  I was able to verify it was RAW by looking at the preferences for the print driver: 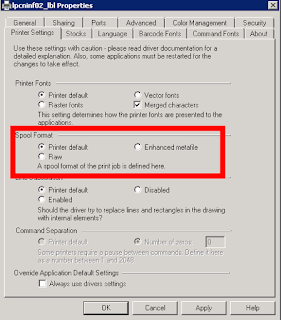 It turns out that ‘Printer default’ and ‘Raw’ are the same value.  Selecting ‘Enhanced metafile’ and reprinting to that printer created the proper SPL file that I could open in cpviewer.  With this I could now see the issue the users were reporting:
With the ZDesigner driver, if I forced the ‘Enhanced metafile’ in the preferences, all the Citrix UPD prints lost their barcodes.  If I set the Citrix UPD to XPS and the Zebra on RAW it printed with a barcode, but the scale was still horribly off (same as the picture above).
I tried adjusting almost every option available on the ZDesigner side, from the paper size, dpi, different stocks, etc.  It consistently turned out scaled down.  If I adjusted the margins it would move the graphic around but nothing would enable the graphic to be the correct size.  I looked at the Citrix UPD advanced settings and changed the paper height, width, dpi, scale, print quality, orientation, etc. Not a single affect was made except for orientation.  At least I knew the settings were applying because of that.  Orientation didn’t make a difference in the scale, just made the tiny graphic vertical instead of horizontal.  At this point I decided it had to be driver related.  I downloaded two different sets of ZDesigner Zebra drivers for the LP-2824, the latest and the last major version release, installed both but the exact same issue still persisted.
Searching for others that may have had the same issue or something similar I found a link to another company providing Zebra label printer drivers, Seagull Scientific.
With nothing else to lose, I installed and configured those drivers per the original spec for media, etc.  Then I printed and checked the SPL file: 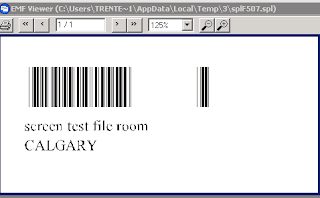 Success!  Barcode is present!  Scale is correct!  Format is pure EMF from Citrix UPD to barcode printer, no XPS anywhere, no RAW anywhere!
All that said, this is a ringing endorsement for what Seagull Scientific has done with the Zebra Barcode printers.  Their drivers *just work* as opposed to the ZDesigner drivers.  If you need to print to older Zebra printers, heck, probably for all Zebra printers, use Seagull’s drivers.
Tags :
Citrix